Manama, Bahrain, Thursday, 6 December 2018 – The second round of the 2018/19 MRF Challenge International Winter Series at the Bahrain International Circuit got underway on Thursday with two practice sessions and qualifying. The day was however marred when Singapore’s Danial Nielsen Frost suffered a brake system failure on his number #68 race car during the qualifying session. Though managing to post a time before his early exit from the session, his sole quick lap time will see Frost start Friday’s first race from the fourth row of the grid in eighth. Kicking off the day’s action with the two practice sessions, the youngster had been competitive as he used the sessions to gather as much data to decide on setup options ahead of the afternoon’s qualifying. Quick out of the gates, Frost did post a time but whilst warming up his tyres on an out lap, his car suffered a brake system failure causing him to lose his brakes. Unhurt in the incident, the failure forced Frost to retire from the remainder of the session.

Frost comments, “It is such a disappointing way to start things off here in
Bahrain, especially after all the effort we have put in to prepare for it. In the
practice sessions, we managed to gather a lot of information to help with the setup options for qualifying. It started out OK, but whilst warming up my tyres, I suddenly lost my brakes. Thankfully, it was while I was warming the tyres up and there was no one else in front of me at the time. I am OK and so very thankful. Though the car did not suffer any damage, there is now a huge amount of work ahead of us as we work to fix the car in time for tomorrow’s races.”

Proceedings from the second round of the 2018/19 MRF Challenge International winter series at the Bahrain International Circuit continues with three races scheduled on Friday, 7 December. The final two races are set to take place on Saturday, 8 December. From Bahrain, the series will take a short break before returning with the third and final round of the series at the Madras Motor Race Track in Chennai, India from 8 to 10 February 2019. 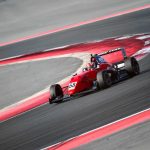