Manama, Bahrain, Friday, 6 December 2018 – Despite a challenging start to the second round of the 2018/19 MRF Challenge International Winter Series in Bahrain following a brake system failure on Thursday, Singapore’s Danial Nielsen Frost made a remarkable comeback when he collected a third place and a podium finish in Race 1 on Friday.

Kicking off the action on the second day with the first of five races on schedule for the weekend, the early morning Race 1 saw Frost get off to a great start, overtaking three cars into the opening sequence of corners to move into contention for a top-three result. Riding on the momentum of his strong start, Frost gained another position by the second lap taking third position. Almost matching the pace of the leaders, Frost kept his composure and his third position on the track all the way to the chequered flag for his fourth visit to the podium this season. The youngster had earlier collected two third place finishes and a win at the previous round in Dubai last November.

The teenager however ended the day with a mixed bag of results in Friday’s Race 2 and Race 3. Suffering a mechanical problem as a result of a shunt by another driver at the start of the morning’s Race 2 forced the teenager to end his race early. Meanwhile, Frost was the unfortunate victim of a melee involving other drivers on the opening lap of Race 3. Whilst trying to avoid a collision, he suffered some damage to his number #68 car. In spite of this, Frost was able to continue though he had to nurse his stricken car all the way to the flag. With the damage compromising his chances of a better result, Frost ended the 10-lap Race 3 in eleventh position.

Frost comments, “After the issues we faced on Thursday, the mechanics did a great job to fix everything for today’s races. We had a great getaway off the start line for Race 1, overtaking three cars into the first set of corners and not long after there was an opportunity to take third place. It was a really great feeling to be back on the podium and we were really looking forward to a repeat in the other two races. Unfortunately, a shunt at the start of Race 2 ended any hope for a good result when a broken suspension brought an end to our race. The start of Race 3 was also a tough one. We got caught in the middle of it and in trying to avoid a collision; the car was hit and suffered some damage. That dropped us down the order and although we could continue in the race, we did so with a damaged car. It was a truly difficult and tough day today but now we want to look at the positives and instead focus on the two remaining races tomorrow.”

The second round of the 2018/19 MRF Challenge International winter series at the Bahrain International Circuit will conclude on Saturday, 8 December with two more races (Race 4 and Race 5) on schedule.

From Bahrain, the series will take a short break before returning with the third and final round of the series at the Madras Motor Race Track in Chennai, India from 8 to 10 February 2019.

*Correct at time of publication 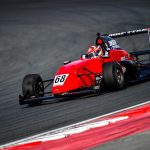 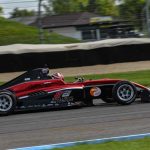