Indy Pro 2000 rookie overcomes a tough qualifying session to finish in the top-five.

MADISON, IL (August 24, 2019) – Exclusive Autosport returned to the high-speed oval at World Wide Technology Raceway in Madison, IL this past weekend for Round 12 of the Indy Pro 2000 Championship Presented by Cooper Tires. The team went into the weekend with confidence, having won the Freedom 90 on the Lucas Oil Raceway oval in Indianapolis this past May. Team drivers Nikita Lastochkin and Danial Frost were both focused on using the squad’s previous experience on the unique 1.25-mile oval to tackle the 55-lap race. Frost started seventh but was on the move following the opening lap chaos to march forward, picking drivers off one by one with a calculated approach to be rewarded with a strong fourth place finish. Lastochkin got caught behind a slower car at the start of the race, but capitalized on a late race yellow to advance on the restart to finish eighth.

“I am really proud with how hard the entire team worked at Gateway. We had an issue at the test (a week prior) that put us on our heels a little, however Mirl Swan and the crew kept working hard to find more pace,” admitted Michael Duncalfe, Team Principal. “We came away with solid points in the championship. We are looking forward to the last two events of the season and continuing our fight in the championship hunt.”

As a ‘night race’ event, the schedule began on Friday afternoon with a half-hour practice session under the hot sun, followed by a qualifying session that would consist of just two flying laps. Qualifying results would be determined by the two-lap average of the run. Qualifying took place as the sun was setting, cooling the track down from practice significantly. Lastochkin would be the first to attempt his two-lap run, and he turned a two-lap average speed of 137.578 mph, putting him on the outside of row four for the race. Frost was the quicker of the two, taking to the track two cars later, turning an average speed of 140.642 mph to qualify seventh.

Saturday’s Indy Pro 2000 race would kick-off the evening’s action in the early afternoon. The weather was beautiful, and the EA drivers knew they had work to do. As the green flag dropped, the entire grid spanned out going into turn one, making it four-wide mid-way through the field. Frost and Lastochkin hung back just a bit to stay out the chaos, and while Danial maintained his position, Nikita was held up and fell back to 11th . By the halfway mark, both drivers had maneuvered their Tatuus PM-18 cars up to the sixth and tenth positions, respectively. A late race caution appeared on lap 40 after an incident in turn three, bunching up the field for a restart with seven laps to go. Frost continued to battle within the top-five and would eventually work himself forward to finish fourth. This result provided much needed points in the championship battle.

In the Indy Pro 2000 Presented by Cooper Tires championship standings, Frost gained points on third place, shrinking the gap to only five points.

Starting off as a young fledgling in the world of motorsports, Danial Frost has been steadily climbing his way up the rankings. He’s consistent in more ways than one – his learning of the technicalities of the sport, both on and off the track, and his dedication to always pushing hard behind the wheel to achieve his objectives, much to the delight and support of his well-loved team.

The next stop for the Road to Indy Presented by Cooper Tires will be the 1.964-mile, 12-turn road course of Portland International Raceway for Rounds 13 and 14 of the Indy Pro 2000 Presented by Cooper Tires Championship. An official series test will take place on Thursday, August 29 , followed by the standard practice, qualifying and doubleheader schedule on Saturday and Sunday (August 30-September 1). Be sure to follow all of the team’s social media platforms throughout the weekend. Exclusive Autosport is pleased to be able to partner with great companies, such as AERO™ Advanced Paint Technology (www.rethinkpaint.com), which is used on all their race cars.

DANIAL FROST – #68
Qualifying: 7th – 32.030 seconds
Race: Start – 7th / Finish – 4th
Driver Quote: “It’s been a difficult week for the team here at Gateway. We weren’t able to find the speed we needed to fight at the front, but we were still able to recover and pick up some solid points, which is important for us in the championship. This was the maximum we could extract, and I can’t thank everyone enough for this weekend. We look forward to Portland.”

Exclusive Autosport (EA) is a professional racing team dedicated to the success of its drivers in open wheel formula car competition in North America. EA operate teams in the Cooper Tires USF2000 Championship and Indy Pro 2000 Championship Presented by Cooper Tires in the United States and both the Ontario and Quebec Formula 1600 series in Canada. Exclusive’s drivers have secured numerous race wins, podium finishes and pole positions, as well as Rookie of the Year awards, a Team USA Scholarship and nominations for Team Canada F1600. Exclusive’s drivers are on the podium in over 80% of the races they enter. Exclusive Management Inc., the team’s parent company, has enjoyed great success in both open wheel and sports car racing and has worked with standout drivers like Thomas McGregor, Jack Mitchell Jr., Shelby Blackstock, Gregory Liefooghe, Jayson Clunie, David Levine and Trenton Estep. EM Inc. drivers are highly sought after in the motorsports industry. 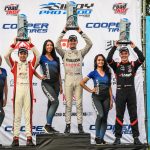 Exclusive Autosport scored its sixth podium of the season at the Grand Prix of Portland with Danial FrostIndyPro2000, Uncategorized