TORONTO, ON, CANANDA (July 14, 2018) – Exclusive Autosport returned to its home soil for the NTT IndyCar Series event held on the streets of Toronto, hitting the challenging temporary circuit for a Road to Indy doubleheader weekend in the Indy Pro 2000 Championship Presented by Cooper Tires. The team began the weekend with positive results as Danial Frost won Race 1 in a dominating fashion, scoring his second win of the year. The Singapore rookie followed up his winning performance with a solid fourth place in Race 2, which keeps him firmly in the title fight. The team is very happy overall with their second win of the year, and another victory at the daunting street circuit, joining their sweep of the USF2000 races in 2017.

“It is always special competing on home soil at the Honda Indy Toronto,” enthused Michael Duncalfe, Team Principal. “It is even more incredible to win here for the second time in two years. Danial made an incredible move at the start of the Race 1 to take the lead and continued to drive flawlessly lap after lap to capture the win Saturday. I can’t thank Mirl Swan, David Kanning and the entire EA crew enough. Mirl and the crew have been working incredibly hard in the shop to ensure our cars are flawless for our drivers at each event. We are looking forward to the next event at Mid-Ohio and continuing to push for more wins, podiums and continue the championship hunt.”

The event started first thing Friday morning with the one and only official Indy Pro 2000 practice of the weekend, although the drivers did not receive much track time as over half the session was halted due to a red flag due brought out by other drivers. Frost and Nikita Lastochkin would eventually set an encouraging opening pace as they were both in the top-five. Friday was a busy day for the drivers as they would also have the qualifying sessions for both races following practice. Qualifying 1 took place mid-day and 17-year-old Frost slotted his PM-18 into the third position after the 20-minute run. Qualifying 2 capped the opening day of the Honda Indy Toronto and in that session, Frost posted a fast lap worthy of the fourth-place starting position while Nikita was ninth in the order.

Saturday’s Indy Pro 2000 series action saw the drivers take to the track mid-morning under the hot Canadian sun. As soon as the green flag dropped, Frost charged to the lead in the first turn, overtaking the front row right from the get-go. Danial then pulled a slight lead on the rest of the field, although it wouldn’t be that easy. The race would be halted by two full-course cautions, making Danial’s job a little harder than the team would have liked. However, with every restart, Frost maintained his lead and pulled off an incredible win. Unfortunately, Lastochkin was running a strong race in the 6th position before a slight error in the difficult turn 8 resulted in contact with the wall and the resultant damage led to secondary contact and damage in Turn 10. This contact put him on the sidelines, unable to finish the race. Nikita ended up 10th in the final classifications.

The second race of the doubleheader would take place on Sunday morning following the USF2000 race. The start was more chaotic than the first, and this forced Frost to fall a couple positions back after being hit from another competitor. Lap after lap, Danial would fight his way forward, turning the fastest lap of the race on several occasions as he chased down the lead trio. Danial would finish where he started, in fourth, gaining crucial championship points. Lastochkin­­­­­­ started on the inside of row number five and held station all race long, finishing in eighth. In the Indy Pro 2000 Presented by Cooper Tires championship standings, Frost maintains his fourth position but gained two points on the leader in Toronto, while Lastochkin cemented his spot in sixth.

The next stop for the Road to Indy Presented by Cooper Tires will be at the purpose-built natural terrain road course at Mid-Ohio. The doubleheader weekend will kick off on July 25 with an official Promotors Test Day. The drivers will take to the 2.258-mile, 13-turn circuit for two races on Saturday and Sunday will be on the hunt for much-needed championship points.

Exclusive Autosport is pleased to be able to partner with great companies, such as AERO™ Advanced Paint Technology (www.rethinkpaint.com), which is used on all their race cars.

Driver Quote: “I am really proud of what the team and I have accomplished this weekend. Managing to pull off a first place on Saturday and a fourth-place finish with a damaged car on Sunday. Thank you to the team, my sponsor Denjet, my parents and my fans for supporting me. Now we look forward to do this again in Mid-Ohio.”

Exclusive Autosport (EA) is a professional racing team dedicated to the success of its drivers in open wheel formula car competition in North America.  EA operate teams in the Cooper Tires USF2000 Championship and Indy Pro 2000 Championship Presented by Cooper Tires in the United States and both the Ontario and Quebec Formula 1600 series in Canada.  Exclusive’s drivers have secured numerous race wins, podium finishes and pole positions, as well as Rookie of the Year awards, a Team USA Scholarship and nominations for Team Canada F1600. Exclusive’s drivers are on the podium in over 80% of the races they enter.  Exclusive Management Inc., the team’s parent company, has enjoyed great success in both open wheel and sports car racing and has worked with standout drivers like Thomas McGregor, Jack Mitchell Jr., Shelby Blackstock, Gregory Liefooghe, Jayson Clunie, David Levine and Trenton Estep.  EM Inc. drivers are highly sought after in the motorsports industry. 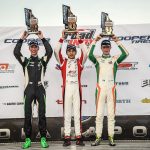 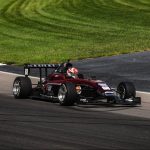