Going up against far more established and world-renowned professional endurance drivers, the youngster held his own to produce a solid qualifying session that would determine the team’s start position for the race later the same day. Frost’s qualifying time of 1:54.680s was enough to secure the team’s number #33 car to a P7 start for the evening’s feature race. The time was also a massive improvement to his efforts from the previous day for the 18-year old, who is making his first ever appearance in an LMP2 car and a Le Mans based series.

Frost comments, “It was a rough and not ideal start to the qualifying session but once I got going and got into the groove, my focus was on trying to lay down as many consistent laps improving my pace with every lap. I would have liked to improve my time a little but I am happy with the overall pace especially knowing that I am going up against some major racing heavyweights.”

Taking on the role as the starting driver for the start of the evening’s race, Frost had to endure a lengthy wait when a heavy downpour forced officials to delay the start of the race. After waiting an hour and fourty minutes, the race finally got underway under the safety car for the first three laps. A good start from Frost saw the 18-year old gain several positions to move up into fifth overall. Producing consistent lap times in the still damp conditions, the outing also saw him briefly lead the race when the teams ahead of him box for fuel and tyres. After his own pit stop,  Frost’s second stint saw a significant improvement when the teenager managed to record a succession of fast purple sectors and even the second quickest overall lap time of the stint. Towards the end of his double stint, Frost gained another position on track before handing over the reigns of the number #33 car over to his teammates John Corbett and Nathan Kumar. After four hours of gruelling racing, the number #33 Inter Europol Competition team LMP2 car eventually finished in sixth place overall.

Frost notes, “Even though it was overall a tough race for the team, I had a really good time here this weekend. It has been a really great experience learning to drive these awesome LMP2 cars. I was given a double stint in today’s race and my sole focus was to be as consistent as possible and I am super stoked with the pace I was able to produce, especially during my second stint. I’m happy that I was able to match and even challenge some of the more experienced and professional drivers, who have been racing in this series for a lot longer than I have. It’s definitely not the result we were expecting, but I can take the positives from the weekend considering where we started. I am really looking forward to the next round in Thailand!

Thank you to the Inter Europol Competition team, the race engineer and the awesome mechanics  for making this experience special. Finally, I must thank both my parents for their incredible support and my sponsors for continued belief.”

Frost’s second outing in the Asian Le Mans Series will see him travel to Thailand’s Chang Buriram International Circuit for the 4Hours of Buriram from 21 to 23 February.

From Thailand, Frost will return to the United States of America for the 2020 season of the Indy Lights series, which will commence this March. 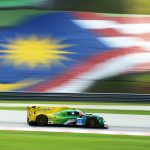